Taking a break from electronics and programming

No electronics or programming this weekend.

Thanks!
With the pen I was taking a break from my scroll saw project - wooden clock. Cutting that wheel (1 of 4) took some time. Hands are made of purple heart as well. Love that material.

Hey, I am a turner too. Did hundreds of pens years ago. Still have MANY blanks and mechanisms. Maybe I can send you some before you buy more?

Nice! Didn’t realize you were a wood-butcher, too. So that makes you, Ian, Pete, and me (that I’m aware of).

You’re reminding me that I have a nice midi lathe in my basement that’s gone unused for too long. I turned a couple of test pieces when I got it, but the included tools were basically crap, and I haven’t gotten around to getting a decent set of turning tools, so it’s been just sitting. Need to do something about that.

Got any recommendations for a good basic set of turning tools? I’ve got a Woodcraft store here in town, and of course there’s always Amazon.

I’ll have to post a pic of one of the pieces I did years ago when I still worked doing TV and theatre carpentry. I worked for a while in a shop that was very well-equipped, including a nice lathe, and I did a few pieces with a glue-up of several different kinds of wood. One piece was a small jewelry box, and another was a stemmed glass with a bowl that flared out at the top, and a very thin base. Would definitely have trouble making something like that with my current turning tools…they just won’t keep a good edge for very long.

Nice job! Wood turning is the one aspect of wood working that I haven’t ventured into yet (mainly because I’ve run out of space). This kit has been on my mind for a long time though… If you want some practice, I’ll have two sent to you (one for me & one for you)

That pen kit looks cool, but I can’t help but thing that the metal parts can’t be very kind to your turning tools.

And did you watch the demo video? Some significant safety issues, IMO. First, I’m of the opinion that when turning, you should always use a face shield…too easy for a chunk of whatever you’re turning to come flying off and hit you in the face, or the whole piece to break loose! And he’s not even wearing safety glasses…just regular eyeglasses…not nearly enough protection when turning.

Second, on two separate occasions, he reaches in to pull off some of the plastic tailings before the stock has stopped moving…given that a big lathe like that has a substantial amount of spin-down time, that’s a great way to get a finger caught between your stock and the tool rest…easily a trip to the ER there.

Third, he’s using no hearing protection at all, from what I can see. While a lathe isn’t as loud as a table saw, it’s loud enough to cause hearing damage, and I’m sure it’s not the only tool in use in that shop. Unfortunately, I can attest to the fact that hearing protection is woefully overlooked in most shops, and I have the tinnitus to prove it. God only gave us two eyes and two ears, and it’s a very good idea to protect them both when woodworking.

I’m a big fan of Woodcraft, so I’m kind of surprised that they posted something with such glaring safety issues. OK, I’m done ranting.

BTW - in terms of space, a mini or midi lathe doesn’t take up much space at all, unless you put a bed extension on it to turn longer pieces.

I would imagine. You must have the patience of a saint!!

Hopefully soon enough we’ll have a FEZ CNC or a FEZ 3D printer.

Na, I didn’t watch the video. I just like the end result

It’s mostly acrylic that you would be turning. Tiny pieces of copper & aluminum wouldn’t really be too hard on your tools. Both are almost as soft as wood. I use my wood tools regularly to cut aluminum. I just go a little slower than I would with wood. But all good reasons why I’d be interested in having someone else do it for me

BTW - in terms of space, a mini or midi lathe doesn’t take up much space at all, unless you put a bed extension on it to turn longer pieces.

Yea, there’s no doubt I could make room if I really wanted to. I keep telling myself so I won’t shell out the $$$…

It’s not that much…the Jet I have is not much more than $500, and think of all the beautiful things you could make for your wife. 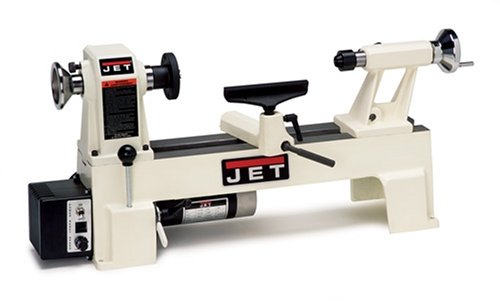 Of course, if we think in FEZes rather than dollars, that’s two Spider starter kits, so maybe that money would be better spent on more gear…tough call!

Yea… The real cost is in time. I have a backlog of furniture requests already that would take me two full years to complete if I could do it full-time

You must have the patience of a saint!!

Far from that ;D

Still have MANY blanks and mechanisms. Maybe I can send you some before you buy more?

Got any recommendations for a good basic set of turning tools? I’ve got a Woodcraft store here in town

Carbide cutters are the best I have experienced so far. Woodcraft sells, them ask for Easy Wood tools. My local Woodcraft has Pen Turning class for $60 (everything provided). Instructor will teach everything and you can try different tools. They also have pen workshop every 1st and 3rd Thursday $10 (you provide kit and consumables).

I like Woodcraft they have lots of different classes and camps in summer.

Yeah I’ve seen that Circuit Board kit in store last week. They have 6 or 8 different colors. I might get the black one for my next pen turning retrieve.

I might get the black one for my next pen turning retrieve.

I’m serious about the offer. You can practice turning me one then turn one for yourself

Alright, you convinced me. I could use more practice.

Cool! Shoot me an email with your address and the link to the pen you want for yourself and I’ll have them shipped to you. Sale ends tomorrow so try and do it today. ian [at] houseoflees [dot] net.

Your pen is ready:

That is really nice! You might just have to offer these on circuitinventor.

The page for the kit says it’s a real circuit board. Is that true? encased in acrylic? You would have something really unique if that board actually did something. Oh, the possibilities…

Nice job! I can’t wait to try it out! THANKS!

It is a real pcb, but it doesn’t have any other function but the look. Finished pen looks really nice. It takes awhile to turn it, though (at least for me).