Tempted to back this considering they do have experience and make machines already. The price looks good too. 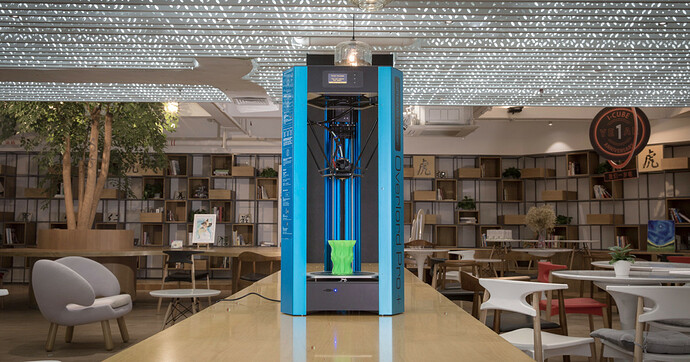 My only concern is that there are no images of the printouts from this machine as I wanted to see what they look like resolution wise.

Anyone use this company before and could comment on the quality of the output?

I’ve built a couple delta printers now. From what I can tell about this one, the construction looks solid and you should get great prints from it. However, there’s no details about the motors, pulleys, controller board or really anything you could use to calculate the precision its capable of. The prints that they show in the video look fantastic but then again they never show close-ups. For the price, I think you’ll be fine.

Personally, I can’t wait for this cutie to become available (any day now). Price is expected to be about $150. I don’t really expect anything great from it except that its going to be awesome to carry around and sit on my desk at work.

The lack of closeups was the reason I’ve been stalling on the order page. I would like to get some idea of the quality of output as I’ve seen some of the stuff printed on local supplied printers to be as rough as hell. I don’t mind a few lines but these where pretty bad.

Personally, I can’t wait for this cutie to become available (any day now). Price is expected to be about $150. I don’t really expect anything great from it except that its going to be awesome to carry around and sit on my desk at work.

At $150, that’s almost impulse purchase range. I was looking at a few of the other Monoprice printers, and they’re quite tempting. Seems like there is a large community around them, enough so that there is plenty of info on upgrades and tweaks to take them from cheap but decent to cheap and excellent.

I decided to just buy a cheap kit - prusa i3 equivalent from geeetech for AU$235. Will see once I build it what its like

I dont see anything special about this. It seems that there big upgrade is just auto leveling.

It seems like there are better and cheaper options on the market already. Why risk an indiegogo not delivering.

Also, I think they pulled it off indiegogo earlier and put it back up.

@ Brett - Ooooooh We should have talked. I have a Geeeetech i3 Prusa. They continually pull down and re-list this thing on Amazon to get rid of bad reviews. Mine had missing parts and rods that were out-of-round and would bind and stick. I managed to source some replacement slide rods and various missing pieces. The electronics package, motor, heated deck, and extruder were fine, but the mechanical elements were awful. Out-of-spec, mismatched to each other and different from the documentation.

The Prusa design is consistently top-rated for build quality (a very stable frame) and I have yet to find a simpler or better design. It’s an open-source design with files out there for the printed or laser-cut parts and source lists for other bits. Lots of people make the open-source Prusa but the Geeetech kit is just a pile of parts that you may or may not be able to assemble into a Prusa. It will save you souring parts, but whether the parts they give you actually come together is an adventure.

My experience is from 2015 - hope yours is better. I did get mine together and it gives superb prints, but putting it together really drained a lot of life essence from me.

I said as much on Amazon. They took the product down and re-listed it without my review. I reviewed again. They relisted again.

I just got the Anet A8 for $168 on ebay. My expectations aren’t that high, so for me it’s working good. So far having to sneaker net the files to the printer isn’t proving to be too much of a hassle.

Thanks @ mcalsyn for the commentary. I’ve had a few of the parts for an i3 for a while but haven’t ever been able to get motivated to do some shopping around to find someone local to laser/waterjet/cnc the frame, and when this one came up at such a price (basically double what I expected to pay for the frame alone) I said what the heck and did it. This can be the acid test on whether I need anything more than this or not.

The screwed and smooth rods seem reasonably straight when I checked the package - not perfect but ok. I have some smooth rod anyway if I need to replace it. When I look at their “regular” pricing its something like AU$520, so my AU$235 must be getting closer to their cost price. And I can see how they trim that by making lots of them. Don’t know whether your kit had a parts list, but mine had one, and most small parts were in separate numbered bags going back to the parts list. Rough counts on screws etc seemed to tally so I’m kinda thinking that I got what will be needed. Will look forward to seeing how rocky that road is

I just got the Anet A8 for $168 on ebay. My expectations aren’t that high, so for me it’s working good. So far having to sneaker net the files to the printer isn’t proving to be too much of a hassle.

I actually just broke down a few minutes ago and ordered the same from GearBest. We have a “Make Day” event coming up on the 20th and I decided to get one and assemble it as my project for that day. Several people locally have bought them recently and the reviews have been decent enough that I think it’ll make a good backup printer. I’m sure I’ll end up throwing more money into it over time in upgrades but if it’ll work half decent out of the box then that will help take some of the load off my one working printer.

@ ianlee74 - Funny about that. I actually considering purchasing another one because there are so many part that I need to make, and it takes sooo looonnngggg.

@ ianlee74 - Funny about that. I actually considering purchasing another one because there are so many part that I need to make, and it takes sooo looonnngggg.

@ ianlee74 - Did you order from the Gearbest link you posted? That one said EU plug. I don’t doubt you’re capable of swapping to US if needed, but wanted to call it out in case you didn’t see it.

Safe to assume this printer could be upgraded to a heated bed, if desired? <$200 is definitely to the point where I might jump just to get started, and if it’s a platform that can be improved as I learn more, that’s cool. Just don’t want to spend money on something that will ultimately end up in the trash.

@ devhammer - I see a 3d printer in your immediate future.

@ devhammer - I see a 3d printer in your immediate future.

It still has to get past the budget committee. Perhaps I can sell it as an educational expense, since we homeschool.

Here is what you do (eventually)

@ devhammer - Actually, if you have any plastic stuff around the house that needs repairing, you can sell it as a maintenance support device.