I finally got the program to load on one of the boards but I can’t debug it. I see the following for any breakpoints.

It still running old one which installed in the module.

Do any of your assembly or class names contain non-ANSI characters? I entered a bug on diacriticals, but maybe there are other cases where this fails. It fails because of some string matching issues in the vsix debugging code.

This doesn’t exactly match the symptoms I saw, but I thought I’d mention it just in case.

It seems more likely to be a pdb mismatch (pdb is from a different build than the code running on the board), which I believe is what Dat was saying.

Assemblies with diacritical marks in their name cannot be debugged

If you create an application (and perhaps class libs too) that has a diacritical in it's name, the debugger will fail...

Make sure never have something like these in your project when add reference: 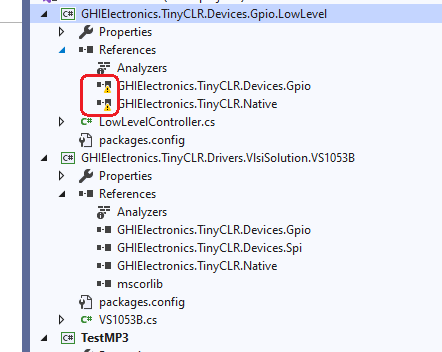