How do you store/transport your gear?

I posted a picture today on the following thread:

of a gear box I picked up for storing and transporting my Gadgeteer and eblock components. I wanted something portable, but with sufficient room for a lot of parts, and at least a couple of larger bins for the Spider mainboard and LCD.

@ ianlee74 suggested starting a new thread to discuss…anyone have favorite solutions for storing all your gear and/or parts?

@ Mike - Go ahead and post your other picture here too. Your drawers at work are certainly everyone’s dream but are very expensive in terms of money & space. I’m curious about home-grown solutions that people have come up with. How do you sort & store your resistors for example?

So, this weekend I broke down and completed phase one of my challenge to get organized - resistor storage. Whatcha think? 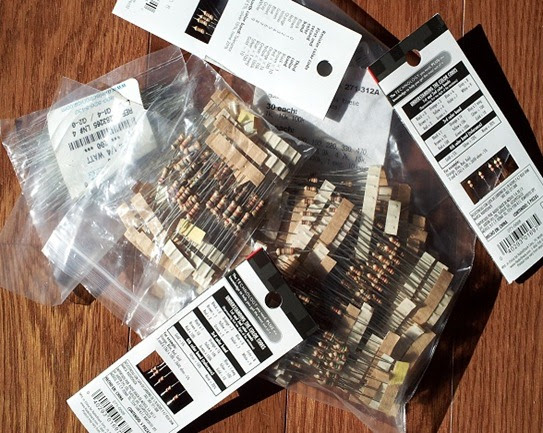 I finally did it.  I threw in the towel.  I finally reached the point where my loss of productivity forced me to stop and do something I’ve ...

Nice! I was just thinking that I will definitely soon need a bigger tackle box, plus a way to better organize parts. I was breadboarding a new IR emitter (3 LEDs this time) and needed a resistor, and had to dig through a big pack of them, with only the bands (or my multimeter) to tell 'em apart. As I’m sure you’ll understand, those tiny bands can be awfully hard to read, so organized resistor storage is probably a high priority for me, too.

Oh, and I got my breadboarded IR emitter working using the Extender module, but didn’t think to add a transistor. Might have helped the output a bit. But the helicopter is flying better every day. Did another demo tonight…

Awesome! Hope to see a video of that thing some day

I dusted off my mini copter a few days ago and entertained the kids with it. I may try a little IR hacking during the Christmas break. I may give my Omnimote some new IR abilities. Currently, it’s XBee only but it would be cool to give it more flexibility.

I definitely know your pain regarding digging through resistors. I have to use a magnifying glass plus a strong flashlight to be able to read the stripes properly and I have 20/15 vision. My office is a little dark but it’s amazing how the colors can be deceiving on those tiny stripes w/o good light.

Also, another thing I discovered in this process is that the stripes on the resistors are sometimes not even close to accurate. I did random comparisons between the stripes and readings from my meter and found some to be off by as much as 20%. Maybe that’s what I get for buying cheap assortment packs off eBay. I thought at first it might be a problem with my meter but when I measured resistors bought in small packs from Radio Shack or from other quality dealers they were right-on. Thankfully, for most things exact accuracy isn’t really necessary with resistors but if you ever run into any issues that’s something to keep in mind.

Get anything in the mail yet?

Video is definitely coming…will probably work on that and a series of blogs posts on the project over the Christmas holiday. I also plan to share the code, either on my blog, on the Code site, or both. One thing I learned in the process of putting this together is that while the local web server for the gadgeteer ethernet module is convenient, it doesn’t stand up to the level of traffic the Kinect can throw at it. Ended up switching to UDP and works much better that way.

Resistors…well, my vision’s pretty good since lasik…the problem is presbyopia, which we’re all gonna get eventually. And you’re right that the color stripes are pretty widely varied from what they’re supposed to look like. Thankfully, I have a very nice meter with which to verify what my eyes are telling me.

Now, I need to get some bins and pick up some more resistors. The kit I have only has about 50 total, I think.

One other thing I failed to mention in the post is that I also found some larger plastic boxes at Wal-Mart that the Plano boxes fit into fairly nicely. So, I end up with a fairly portable solution also.

Regarding the stripes… The delima I ran into was do I store the resistors according to their stripe values or their actual values. It was a tough call and one that might bite me someday but I decided to go with the stripe values because knowing my memory, one day I’ll look in there and decide I put them in the wrong place and move them…

Yes, resistors in series are additive in their resistance. However, it’s quite different if they’re in parallel. Wikipedia explains the formula fairly well.

A resistor is a passive two-terminal electrical component that implements electrical resistance as a circuit element. In electronic circuits, resistors are used to reduce current flow, adjust signal levels, to divide voltages, bias active elements, and terminate transmission lines, among other uses. High-power resistors that can dissipate many watts of electrical power as heat, may be used as part of motor controls, in power distribution systems, or as test loads for generators. Fixed resistors h...

I like the resistor storage.
I use three things to store:
[ulist]
A box with compartiments for storing tinkering stuff like potentiometers, buttons,wires
2 cabinets with trays which contain a lot of electronics components resistors, capacitors ,connectors, wires, sensors etc.
1 safe to store my fez boards and etching chemicals. This is no joke by the way. All of my boards (except my tinkering panda) are stored in a safe ;D
[/ulist]

1 safe to store my fez boards and etching chemicals.

Hope no one shakes your safe!

Tonight I organized my electrolytic capacitors. 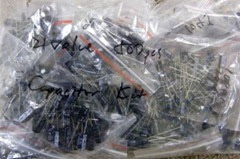 Tonight I decided to take on the next chapter in “Operation: Organize my Parts!” (OOP) .  Since I didn’t want to start a very large project,...