I’m thinking of attempting to create a DaisyLink module but am hesitant that I may be biting off more than I really want. One idea I have that would greatly simplify things would be for GHI to go ahead and release the source code & schematics for the Smart Multicolor LED module. Isn’t that the plan? With that in place then it simply becomes a matter of providing the module specific code. This module would be a great example of how to do DaisyLink.

My biggest hesitation is that I’ve never programmed a microprocessor other than NETMF. What additional hardware/software would I need to be able to program the Cortex-M0 like is on the LED module?

We are going to release them but we are changing few things first. But you do not have to wait as Microsoft already provide Dasylink code.

Don’t hesitate! Bit banging is fun! It’s refreshing not to have to add a bunch of reference libraries to get something to work. Sure, you might stumble a bit with the syntax, but figuring out those details is a large part of the satisfaction. Plus you’ve got an internet full of information and forums to back you up!

@ Gus - suggestion for the SMD LED on that module - get a brighter one! Something like http://www.sparkfun.com/products/10866. I have several these and it blows the doors off yours in the brightness category. I doubt it would add anything to the cost. I’ll post another ‘official suggestion’ thread once the schematics are posted.

It’s not so much the code that scares me as the additional processor. I don’t want to have to spend a ton on an ARM programmer/compiler right now. What’s the cheapest/easiest way to do this?

It doesn’t have to be an ARM.

I realize that. But, it would really kickstart things to start with the existing design of the LED module and build from there. Whichever processor I went with it would be a new learning experience.

So, let’s open it up then… What would be the simplest microprocessor to start with that requires the least investment and is sufficient for DaisyLink? Arduino? That would be blasphemy…

Microsoft uses Cypress Semiconductor PSoC CY8C21223-24LGXI programmable logic device on their LED. It is really up to you,whatever you are the most comfortable with.

That was the idea, daisylink in independent from processor/manufactures. You can use anything…even an arduino.

Arduino? That would be blasphemy…

Then blaspheme we shall! The first thing I did when I saw the DuinoProto (as in Arduino

) was to order a Boarduino kit from Adafruit to make the “coprocessor” Gus mentioned in the contest. They sell ATMega328 chips for $6 with bootloader installed! And that’s the retail price! Super cheap, DIY friendly, and powerful enough to do plenty of stuff.

I’m not going to start with DaisyLink, but may get there after crankin’ out a prize winning Piezo design

DuinoProto is awesome … I think.

Blogged about it yesterday btw. 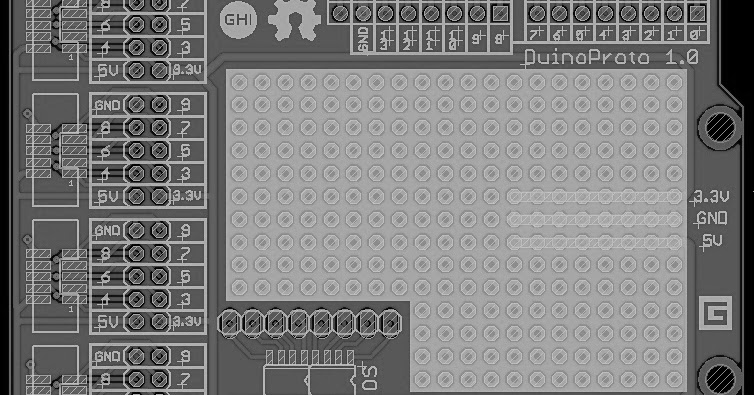 DuinoProto - a bridge between Gadgeteer and Arduino.

I am a big fun of the Microsoft Gadgeteer (if you have not figure it out by now :) ). Right now there is pretty much only one company in th...

Ya’ll are killing me… I know it doesn’t matter which processor. I’m looking for suggestions for which one to start with since I haven’t used any of them. I know many of you have used PICs, ARMs, ATMegas, etc. If I wanted to start learning non-NETMF today with a goal of the lowest cost of entry and a reasonable chip price, where would you start?

@ ransomhall Arduino is the way I’m leaning since there’s plenty of info about it out there. However, for a few bucks more I can get the ARM used on the LED module. But, I’m unsure what I need to be able to program it…

@ architect I read your post this morning. Good job.

Ya’ll are killing me

I recently started playing with the other Atmel processors, specially for co-processor type scenarios like what you’re talking about.

It even uses the visual studio shell for programming, which makes it that much more familiar, in case that’s important.

PIC is also a good choice. It’s a bit of a holy war when it comes to AVR vs. PIC, so I wouldn’t suggest even going there. It’s like C# vs VB used to be.

My productivity is much higher with NETMF, but for helper processors, you can’t beat throwing in a little C.

Thanks for the great info. That does look good. My only hesitation is that I would really like a solution such as the Arduino that lets me program the chip, remove it and then place it in a semi-permanent PCB/breadboard once I’m happy with it and am ready to integrate into NETMF. It doesn’t look like you could do that with the AVR dev board. For testing DaisyLink you’re going to have to have multiple AVR dev boards if you can’t remove the chip.

Just so you know, trashing VB will NOT getting you invited to Thanksgiving dinner at my house.

C# is growing on me, and I find myself using it more frequently these days than VB, but VB has a lot to recommend it, and I still find that there are many things that are just more obscure and difficult to grasp in C#.

If porting .NET MF to VB opens up the goodness of embedded programming and hardware hacking to a larger audience, that’s a very good thing, IMO.

OK, I’ll go crawl back into my VB hole now.

I gave up arguing about what language is better or not long time ago - waste of time.

There is no arguing. C is the only language used professionally on embedded systems so C# makes sense

Ah the good ol Aussie beer… not that I drink the stuff !