G80, flashed with with the latest TinyCLR build.

After I flash the code below, it works the first time. However, whenever I try to deploy or debug again, I have to fully erase the chip with the bootloader and reload the TinyCLR and then reload the program and again vicious cycle. 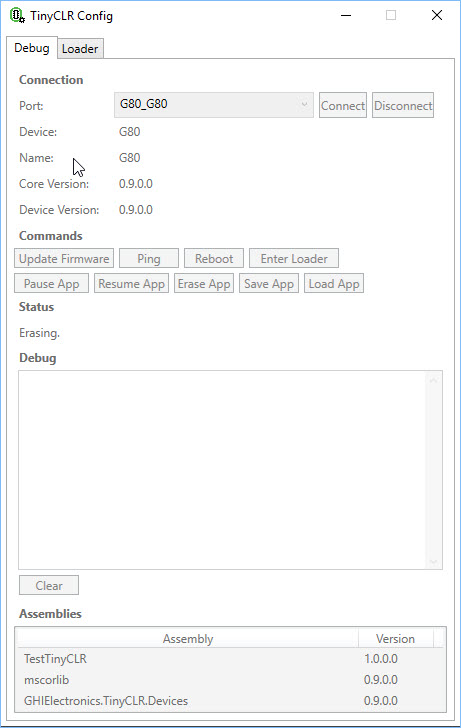 Same behaviour here.
If I remove all CAN code, it runs fine so it’s probably related to CAN and deploy.

Did we mess up CAN?

I seen that the issue was fixed with #201

I got latest and rebuilt from source.

The issue where it freezes on Erasing sector 1 is resolved, however, a new bug has been introduced.

After VS deploys for the second time, it completes deployment. However, the device hangs and VS cannot connect to debug. (See below)

Also, attempting to erase the app from TinyCLR Config fails, as it freezes until I disconnect the board.

Is this the proper channel to report these bugs/issues?

The bug mentioned above is also present in the latest build of G120 firmware.

VS Just freezes and sits there

Tell us exactly log commit id then we will try.

It is the latest build from GitHub. I downloaded and built 0c11b65 today, and G80 still crashes on second deploy during debugging attachment and G120 wont recognize as a TinyCLR device at all now

I believe something went wrong with your project. You shouldn’t see any issue on G120.

Latest build may require latest core library, it could be your problem.

Try to see the fix and apply it locally.

As I see 0x0C11B65 it requires to change something with RTC so you should not use it.