It was a long time since I last visited this site and now, when I am again have a will to do a home project with my old PANDA 2 I am surprised…

Where is code.tinycrl.com? I am desperate to find any code samples, drivers, libraries for the project I want to make.

I have few questions and would be grateful if you guys can shed some light on it:

It’s nice to be here again, thanks!

You can search the code share on this site using the search box on the top navigation.

I remember that Pete Brown constructed a Midi Module. I don’t know if it will help you

Module drivers and other code for my .NET Micro Framework projects.

depending on what addressable LED strip you want, another search in codeshare is needed. here’s one example
https://www.ghielectronics.com/community/codeshare/entry/649

Hey guys! Thank you very much for the input! I was able to revive yesterday with my FEZ Panda 2 and have already did a MIDI IN schema and a program which gets those messages. Thanks!

in order to make a STRIP of it I just need to solder GND to GND, DO to DI, and 5V to 5V from one led to another?
What I am afraid of is that those are just the LEDs and I need to put more “chips” to make them communicate. Sorry if it’s a dumb question but I am a newbie in electronics

Also, is there any difference between the above PCB version and the individual ones if we have in mind that all the controllers are already inside the LED as I understand:

Those LEDs also have all the IO so I am curious what the purpose of having PCB if size-wise it makes almost no difference.

WS2812 are stand-alone so you don’t need any other chips.

Your thoughts on connections (+5v, GND, and DO -> DI) are correct, for either product you are looking at. The difference for the ones with PCBs is you need to worry less about the interconnections than with individual LEDs (they’re harder to solder direct onto, greater chance of zapping things with bare wires, and harder to dissipate heat)

Depending on what form factor you actually need should make your decision on what form factor to buy. If you want fixed two-dimensional “strip” then the PCB version is probably a good option. If you want to make your own PCBs then individual LEDs is a good idea. If you need some three-dimensional capability then the pre-formed flexible strip is best.

@ Brett - Thanks for the answer!

Is there an update of pete brown’s library for Panda 3?

Is there an update of pete brown’s library for Panda 3?

codeplex (or GitHub) will be where it is posted if there is. But why do you think there’s a need ? What can’t you make work?

(if you have time)

Midiplayers send midifiles to the synth.
It is useful, cause often you work with music and you’re alone,
the pay for a band is too expensive. So they pay you only if you play alone.
That have to make 60 songs well executed to touch some money.
Many pianobar men make it as its main or second job, and they need to
play and sing, it’s hard if you’re not Ray Charles (after all you are paid much less) almost all when you play some difficult song singing very loud.
When you play good on synth(or on a digital piano), often you cannot reach some high pitch note (example, playing some freddy mercury song).

The inconvenient is that public often listening to the midifiles coming out from the sytnh say "hey, this man isn’t really playing, it’s just pretending.

My idea: to read midifiles without hearing them.

They transmit the midi out signals to the synth, but none can hear them.

Something idiot? Maybe…
Maybe not.

Not idiot if a midifile send the chords notes at a specific time,
and the pianoman play only correct note of current chord.
So the midifile is not used to play but to avoid the notes that are not part of the chord.

How? You make some sort of filter that transform the uncorrect note to the nearest good one.

See as a remapping the octave:
this is the midifile of chords of Beatles “Let it be” (the first 12 seconds, for example). It’s only some extremely simple just for example, of course a musician play and sing without problem a song like this (beautiful but simple).
Often the pianoman have to arp on chords more “jazzy”.

You have no idea how many solo-musicians ask me for that project, that
i made with Arduino mega with some problem that i’d not have with netfm
microboards.
This way you can concentrate on singing while playing synth without possibility of errors (each key you hit is transformed in a note that goes well in the chord) 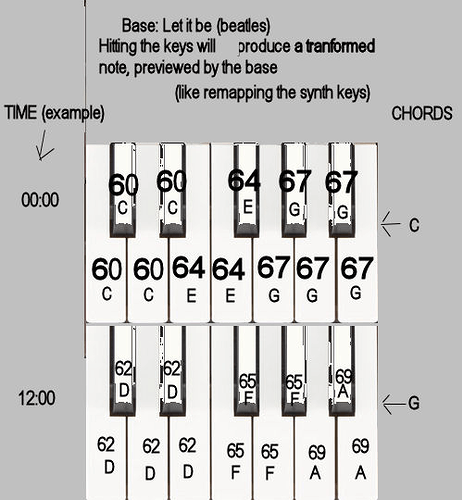 ok, but what does that have to do with an updated library for Panda3 ?