DIY Cellphone has the footprint of an ice cream sandwich, definitely doesn't...

Building your own wireless communications device isn't for the faint of heart, or the law-abiding -- the FCC tends to prefer placing its own stamp of approval on devices that utilize US airwaves, making a homegrown mobile phone an unlikely...

Why can’t this be done with FEZ?

What else? Can this be done?

The price would be a bit higher though.

[quote]Building your own wireless communications device isn’t for the faint of heart, or the law-abiding – the FCC tends to prefer placing its own stamp of approval on devices that utilize US airwaves, making a homegrown mobile phone an unlikely proposition. That didn’t stop a team at the MIT Media Lab from creating such a DIY kit, however. Meet the Do-It-Yourself Cellphone. This wood-based mobile rig, while it’s currently in the prototype phase (where it may indefinitely remain), would eventually ship with a circuit board, control pad, a fairly beefy antenna and a monochrome LCD. Sounds like it’d be right at home at some kid’s garage workshop in the early '80s, not showcased at an MIT open house. The argument here is that people spend more time with their phone than with any other device, so naturally they’d want to build one to their liking. Nowadays, folks expect their pocketable handset to enable them to not only place and receive phone calls, but also store phone numbers, offer a rechargeable battery, and, well, in some cases even send and receive email, and surf the web – none of which are available with such a kit.

The prototype we saw was fully functional. It could place calls. It could receive calls. There was even Caller ID! The phone does indeed feel homemade, with its laser-cut plywood case and a design that lacks some of the most basic gadget essentials, like a rechargeable battery (or at very least some provisions for replacing the 9-volt inside without unscrewing the case). Audio quality sounded fine, and calls went out and came in without a hitch – there’s a SIM card slot inside, letting you bring the nondescript phone to the carrier of your choice. Does it work? Yes. Is it worth dropping $100-150 in parts to build a jumbo-sized phone with a microscopic feature set? No, there’s definitely nothing smart about the DIY Cellphone. If you want to throw together your own handset, however, and not risk anyone questioning the legitimacy of your homemade claim, you might want to keep an eye out for this to come to market. The rest of you will find everything you need in the video just past the break. We’re just happy to have walked away without any splinters.[/quote]

It could be done, almost simply in fact. But not many people will put on the money and effort to make a cell when you can buy one cheap enough.

Put a big reward contest up and then you might see something.

Here you go another one - AVRphone 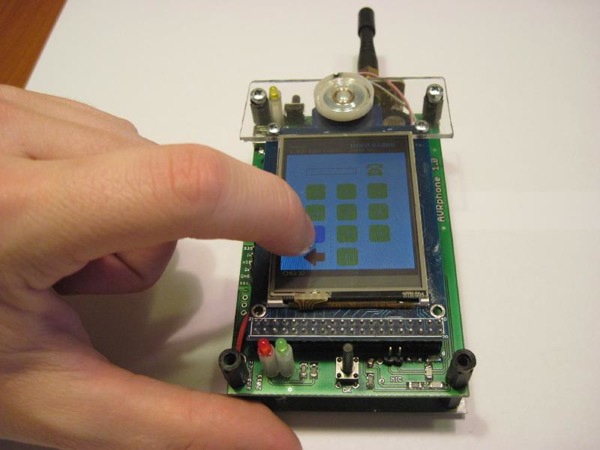 avrphone [Projects] via HaD. AvrPhone is a simple mobile phone with a touchscreen. His brain is AVR microcontroller ATmega128 (128 kB flash, 4 kB SRAM) and user interface provides 2.4 “LCD di…

So within the FEZ world … how would one handle the audio aspect?

Is it built into the GSM modules? Or would the audio need to be encoded to a telephony standard to send and the decoded when receiving?

There are some details in pdf, but you need to translate it from Czech ;D

Now that one is cool. Looks like a bit of a pain to use w/o a keypad though.

@ mhectorgato
Many of the mudules that I have looked at has audio built in. Just connect a headphone and a mic and your set. Some also has pins to connect a speaker for ringing and for speaker phone…