New on for me…

Client specified Samtec headers - looks like they are poisonous!!! 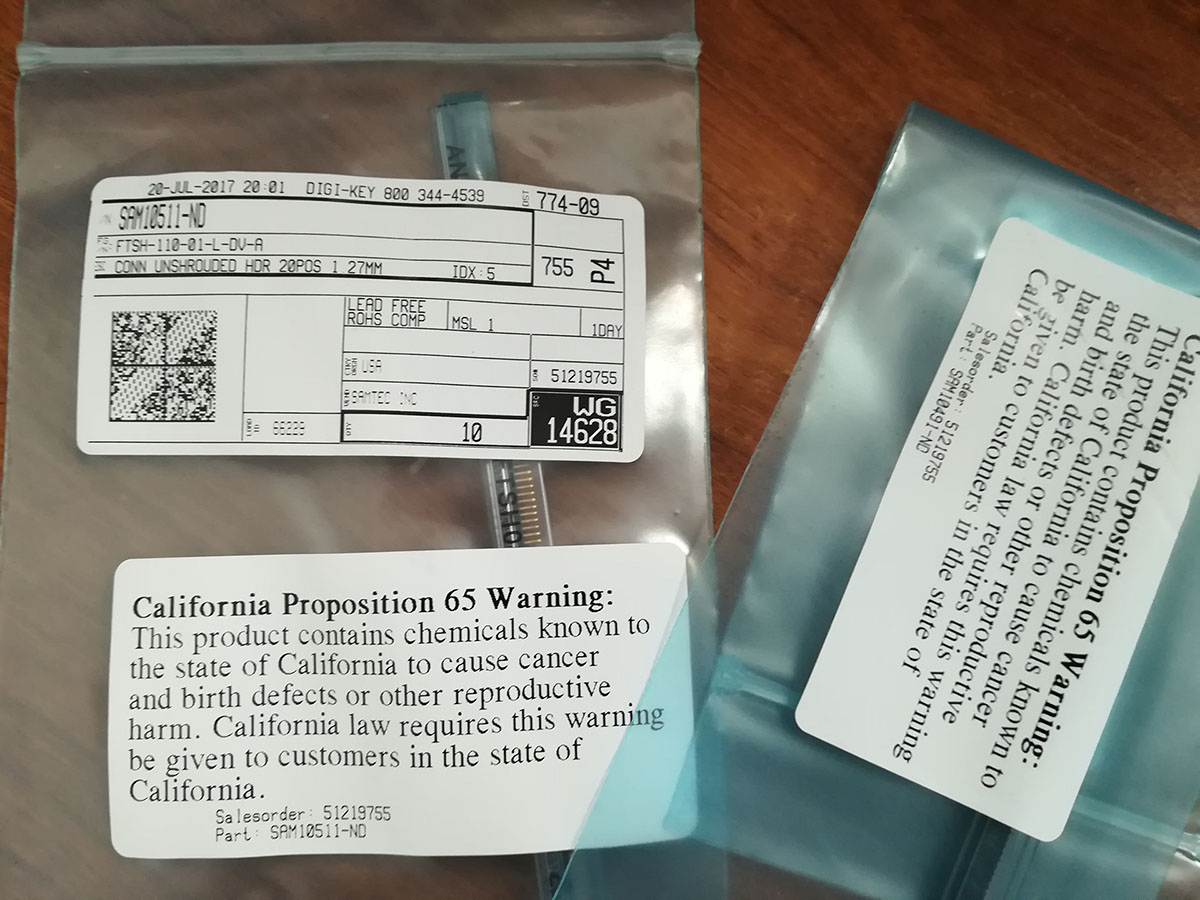 Luckily it seems they are only dangerous in California

I had a look at the material date sheet and the only thing I found was the 3.1% of lead used in the alignment pin.

We have a similar warning posted at the entrance to our building. Most food markets also have these posted.
At least we know that the politicians are keeping us safe.
I rest much better at night.

I bought some brass fittings the other day, for a gas pipe - and the same warnings…

@Brett - Well brass fittings could be dangerous if you threw them at someone, but pissy little 1.27mm headers?

Sure, your headers are small, but my pipe fittings also weren’t that big

We once ordered some plasic covers for unused Slots in some pice of hardare.
The got delayed because the plasic covers did not have the RoHS (lead free) Label.

@Brett - Well brass fittings could be dangerous if you threw them at someone, but pissy little 1.27mm headers?

But what if someone eats 1000 of them

Real men use Lead… You bet!

As a kid my brother and I use to get lead from a neighbor (Ran a linotype machine for a Chicago newspaper. Lead lines of typeface.).

We would melt it and make molds of different objects. Yes they sold molds to kids then!

No harm to me as far as I can tell.

Real men use Lead… You bet!

(Ran a linotype machine for a Chicago newspaper. Lead lines of typeface.).

I grew up soldering with lead in my grandpas’ old TV and VCR repair shop. I probably ate lead paint when I was a kid and mom would stick my nose in a corner. (I know for sure I chipped a bunch off the wall because when she pulled me out of the corner there was another butt whipping headed my way for peeling the lime green paint off the kitchen corner wall…)

Never had any issue with any of it.

Later, though, as an adult, when I became a firearms instructor and range safety officer I really had to mind my manners with lead. Suddenly it was no joke anymore. I have several friends who are competitive or otherwise serious shooters who ended up with elevated lead levels in their blood. Had to go through rather serious procedures to get heavy metals levels back down again to safe areas.

But I agree there is serious overkill in the amount of nanny state going on. There’s a point when it should be considered untenable to spend additional money and energy trying to protect ourselves from ourselves.

“Don’t do stupid stuff” - covers about 99% of what you need to know to get through life.

Takes up less room on packing materials too.