I have no hardware experience, but I find the gadgeteer idea pretty cool, so I pre-ordered my FEZ Spider kit back in August. It arrived sometime in October (?) but I was busy with other stuff I haven’t been able to play with it. Today I finally decided to open it up and try to build something. I followed the camera tutorial, but it didn’t work! After a lot of experimentation, I concluded that BOTH of my buttons are defective

I added a Debug.Print statement in the button pressed event handler and discovered they are only picking up about 1 in 20-40 clicks! I swapped the button out and replaced it with the joystick button and it worked fine.

I later decided to try build some sort of game, but then I discovered my joystick is also acting funny. First it’s kinda noisy, but I suppose that’s the nature of analog signal? It’s picking up random noise of up to 0.1 in magnitude (on average closer to 0.05) at it’s neutral position. But most importantly, the wiring seems to be wrong as well. Somehow whatever I do with it, the reported X and Y joystick position are always in opposite direction (either +ve X and -ve Y, or -ve X and +ve Y), essentially turning it into a 1D measurement! I tested it with this code here: http://pastie.org/3008997 . Can someone verify it with their hardware?

Am I doing something wrong or I am just THAT unlucky? What should I do?

Sounds like you need to play with your glitch filter. Check these out and see if you can figure out anything.

In continuing with the NETMF for Electronics Noobs series of tutorials, today I’m going to demonstrate how to connect a button/switch to a ... 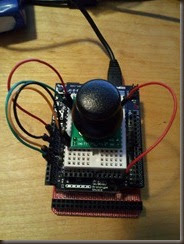 Using a Joystick With NETMF and the NETMFx Joystick Library

As I’m working on the Omnimote , I decided the next article in the NETMF for Electronics Noobs series should be about how to interface a j...

I haven’t checked if I get the same noise you are experiencing with the joystick.

Welcome to the community godfreykfc!
Here is the link to the new button driver: http://tinyclr.com/forum/21/4373/

Download that, it will update the button driver and fix your button issue! The joystick to my knowledge is a bit wacky at the moment, but I think is being fixed in the next SDK. Maybe Gus can verify?

Let us know if your issue was solved :D!

Once you install it, it replaces the NetMF, Gadgeteer and GHI DLLs - except for existing projects.
For any projects you’ve built using the previous SDK, you’ll have to re-associate your references.

[quote]Welcome to the community godfreykfc!
Here is the link to the new button driver: http://tinyclr.com/forum/21/4373/
[/quote]

This shouldn’t be used. We deleted the patch and added a note about this.

Please use the SDK Jimmy pointed out which is another beta release. We are clearing out last few bugs.

Oh! my apologies, didnt know there was a SDK released for it

You can download the complete project, hook up your modules as shown in the project, compile and run. From that point you can play with the Joystick’s sample rates, sensitivity, and null band.