I am starting my first project. I’m new to .NETMF but have been programming C, C++ for 20 years and .NET for 7. Also new to the whole world of circuit boards but have been reading and learning a lot lately.

My project is to create a replacement controller for a pellet grill. I want the values of the PID to be configured remotely and usage data on the cook stored in the cloud. Therefore, I need the board to have WiFi and support at least 4 type k thermocouples. I initially had this hardware picked out.

But after a little more research, I am thinking the Cobra 2 might be a better board with the WiFi already included.

This is all new to me, I’d appreciate help from anyone willing to offer advice/suggestions on the best hardware to obtain for this project.

The Spider is Open Source Hardware so will not support the WiFi module you listed.

Your other option is the Cobra 2

I use this with the onboard WiFi for home automation and it is easy to work with. WiFi took me about 30 mins of coding to get working

The only issue you will have is that there is not enough sockets to support the 4 thermocouples you need. It may work with an extender but as I have not used these before, I’ll leave that to someone else to comment on.

Sounds like an interesting project by the way. I also enjoy building something that gets its data from the outside work and seeing it change on a display or website is cool

I won’t need a socket for each thermocouple. I just need to be able to open a socket to call a web service that will receive an XML document with data from the 4 sensors. I will also return an XML document that will contain any new settings that might have been uploaded from the mobile app and apply those to the PID.

The thermocouples will need to be the type that can be inserted into a brisket or pork roast for example. I noticed there is also a OneWire device but I am still a little confused on which is going to allow me to monitor the pit temperature and the internal temperature of meat.

I wish I could find sensors and a board that “plugged in”, like headphones.

Oops. Confusion about the name sockets. I was referring to the sockets to connect the thermocouple modules to the board, not the TCP sockets.

Finding food grade sensors is a bit tough. Watch out with 1-wire temp sensors as they are max 150 deg C so unlikely to work in your oven.

I did find this. Not sure if food grade though. 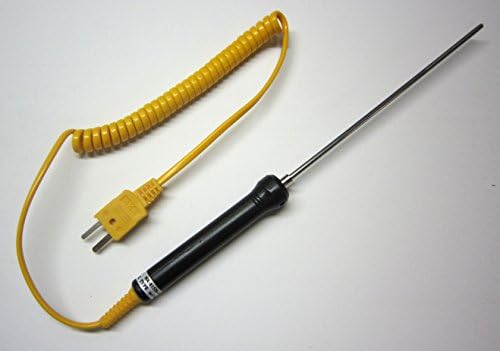 This is a great medium size insertion thermocouple with a K-Type sensor. The sensor is housed at the tip of a 6 inch long stainless steel probe, which comes with a 3 inch long handle. It has a miniatu ...

I don’t think the GHI sensor is ideal for insertion into the meat. It will do for monitoring the pit though.

Spider is based on EMX and supports the WiFi module

Spider is based on EMX and supports the WiFi module

Oops. I thought that it was OSHW so must have looked at the wrong board!! My bad.

Anyway, the cost of the Cobra 2 is less than Spider and the WiFi module and a faster processor too

The Gadgeteer Thermocouple module is a simple SPI device but the GHI team have set it up as needing an X or Y socket and it simply bitbangs the lines. You can see the driver here http://gadgeteer.codeplex.com/SourceControl/latest#Main/Modules/GHIElectronics/Thermocouple/Software/Thermocouple/Thermocouple_42/Thermocouple_42.cs

You could simplify the Gadgeteer socket requirements by using all 4 TC modules on one Y socket (that guarantees you have a full compliment of 8 pins) and changing the driver (you can see some tips to start you here https://www.ghielectronics.com/docs/122/gadgeteer-driver-modification ) The things you’d need to do are to have common MISO and SCK lines, and have individual CS lines for each of the devices.

For your particular problem, you REALLY want a thermocouple, not a one-wire device. The one-wire devices are much lower temperature so you’re likely to go out of range pretty quickly I would expect. I roast coffee in a converted hooded BBQ and use TCs for that, so that’s most likely what will suit your need too.

I would also say that from a connector standpoint, the reason you’ll find TCs have these spade lugs, is that it’s an industry standard. TCs tend to be used everywhere in industrial environments and need to be replaced, this is a simple connection method. Go look on ebay for different hot-end types and you might find one more like a meat probe - they aren’t cheap but they aren’t expensive, so I’d say get a few spares…

And final tip - the shielding on the TC wires itself can often lead to signal issues if you don’t ground it properly, and if your device isn’t also grounded to that. It’s worth playing around and checking the readings while you’re able to and make sure you’ve got as low a noise as possible (which will show as a stable temperature)