TinyCLR not appearing in extension list for VS Code

I had a shot at using GHI products several years ago but never really got anywhere with it. Heard about the latest incarnation of GHI boards (I’m still on their mailing list) and thought I’d have another look.
The first thing I did was fire up VS Code (I’m on Linux Mint 19.3 BTW) to add the TinyCLR extenstion. Except it didn’t appear on the list. 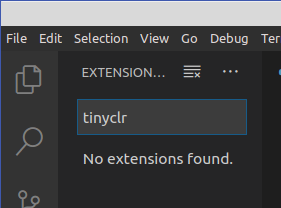 Do I have to install something, or do something to get it to appear? Or does it just not work on Linux?
Thanks.

Welcome back. TinyCLR requires visual studio, not code. You can use community edition however so it is still free. But note that we were in the middle of updating docs and website. A lot will change in the next month.

Thanks @Gus_Issa for the update. I’ll keep an eye out.

Whoope. Seems the community edition is Windoze only. Code is the only version available for Linux. Guess I’ll have to wait for the Mono version of TinyCLR… (not holding my breath)

Code is the only version available for Linux.

Code is the only version available for Linux

What about running a VM for Windows under Linux? I’ve done this to build a test system for old XP apps to run under. Works good.

Thanks @Dave_McLaughlin. I have Win7 running in VM for one program I use a lot but for which there is no Linux equivalent. I’ve found though that Windows runs like a dog with one leg in a VM. Even running a browser is painfully slow compared to Linux. I don’t know if win10 would be any better. But for me it’s not worth upgrading just for one program.
@Justin I used Linux for years until Win7 was released. Then I used Win7 exclusively and was very happy with it. Then Win8, 8.1 and 10 were released, and I went back to Linux. I like 7, but the others I found too difficult to use, too slow, too unreliable and too expensive. Maybe I’m just used to Linux being free, and all the software being free, and working at least as well is Windoze if not better, and running on older hardware (so I’m not always out buying the latest and greatest. All my PCs were given to me by people who didn’t want them any more as they wouldn’t run win10), But that’s just me.

Win10 is my favorite. Not having any issues at all.

Wow. Windows 8 was so bad, the guy went back to Linux.

EDIT: Perhaps Gus, it is time to write and extension for VSCode. Will the compiler even be able to be ported?

Perhaps Gus, it is time to write and extension for VSCode

Why not VS Online?

VS Online is a virtual machine; it’s very expensive. VS Code is free.

I don’t know GHI’s business model, but it seems with all the changes happening at the moment porting to other OSes (linux and Mac) is probably near the bottom of the inbox. Better to look after your paying customers first, and they are Windows users. Mac users represent about 10% of computer users worldwide, Linux less than one percent. On top of that there are different Linux flavours that may require tweaks to get your product to work on them. A lot of work for not a lot of return.

Here is a good reason why it is not available! https://stackoverflow.com/questions/35281045/is-it-possible-to-write-visual-studio-code-extensions-in-c-sharp and I am sure Linux usage is now approaching 2%… but still not enough (given the target audience).

@networkfusion, way too technical for me. I’m just a humble user who likes to play around with programming microcontrollers for a bit of fun. I’m currently using Zerynth and XOD mostly, although XOD makes my brain hurt.
Interesting to hear that Linux usage has roughly doubled since last time I looked.