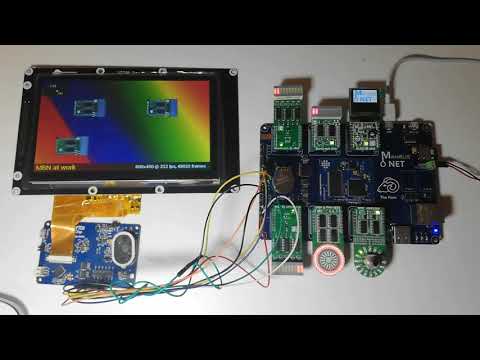 The new MBN Ram Board has

any news about future availability ?

As I’m writing, we will build a second prototype since we’ve made some changes after that first prototype (the one in the demo).
This should occur once SC20260E SOMs are available at suppliers, I just can’t say when at the moment.

Then, if everything is ok, the questions will be :

We can build them for you

I would not replace screwheader by standard male header. i prefer to pay a little bit more and get a better quality). I really think that with TinyClr 2, there is a market for several boards on the market. The missing part is probably the lack of marketing done around it (hobbyist) I have my ghi boards ordered for several weeks and I will buy your board as well. I discovered Ghi thanks to the Quail :).
KickStarter ?

We can build them for you

You have an email

@philippeb : perhaps it could be a choice : screwdrivers or male headers ? I too prefer screwheaders but the cost is really higher, as you may imagine.

I’m a bit afraid of KickStarter campains, to be honest. I don’t know why but I’m still keeping in mind a NETMF clock campain…
But this is certainly something to think at, I agree.

yes, selling board with options is one good idea.
Maybe try distribute the board via website like selectronics, antratek, …
They had Netmf product in the past. You buy a TinyClr board via mouser, rs… only if you know that the product exists. Sites like Selectronics … let people know that the product exist… and to me that is the missing part (hobbyist)

yeah I always think the biggest problem with “niche” products like this is how to get to quantity without going hugely into debt and then ending up with excess that nobody will buy. I actually think Kickstarter is OK for this, but it is up to you as the “producer” to not do a Chris Walker/Agent Watch on us. Personally, I’d buy one to just support your efforts !

It should not/won’t be similar to the Agent Watch as the product does indeed exist. Studies, prototypes and tests are already done, so it’s now “only” a matter of manufacturing and budget to invest.

I will see how/if Kickstarter can help us.

And thank you very much for supporting us !

@philippeb : using distributors implies a big (huge ?) quantity of boards, to me. It would mean that only companies like GHI or MikroE would build the boards and advertise for it.
Which in turn implies that they would have to make money on it, which is of course perfectly understandable, no discussion here. But we would then loose some flexibility in changing things, I think.
Again, this is expected, I have nothing against that. It’s just a fact that needs to be taken into account.

So far, and until we can quantify the real interest, I just don’t know where we will go.

To me, your board is an interesting addition to the current offer. and his future success is linked with TinyClr success. I have absolutely no doubt about that. The meadow project was funded quite quickly without finalized O/S (and still not by the way). TinlyClr will be finalized soon and works… I will buy 2 for supporting your effort

The KickStarter campaign is now online : The RAM Board (Canceled) by Christophe Gerbier — Kickstarter