Looking for a production programmer that can program a G30 as well as a PIC. Would something like this work?

That’s basically what the old PIC burner looks like lol

So far every single G30 I have programmed has needed the FW reflashed before programming though…Would that be a problem? It says it can flash. 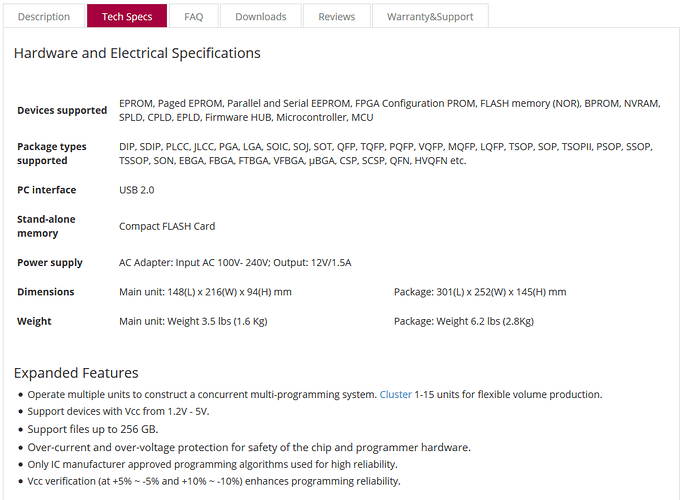 Yes, the firmware would need flashing before putting into your environment. The version that it comes with might be old. But don’t put the firmware on before you solder it. Only ROMs should come like that. Just use the USB port (you did leave a usb port right?).

We didn’t have the ability to import a PIC programmer back in the day, so we had to build one from instructions we found on the internet. I still have it actually. You kids today, have it so easy!

Why can’t I put the FW on before soldering? Ideally I would like to have the USB port only for software updates later down the road.

Flashing FW and loading code via USB is way too slow and also too complicated for my technicians. I don’t want to be the one programming hundreds of these lol I want to be spending my time designing more boards.

In circuit programming is usually done during panelized testing of the boards anyways. I recommend post production programming because I don’t know what the reflow retention ability of the G30 is. The heat could affect the memory cells (I’m not sure). Also, how are you planning to flash the chips before production? Wouldn’t that be even just as tedious?

This programmer says it can flash so if its possible to flash FW from the device’s SD card then a hex file, someone else can do it and it won’t be tedious. Having to teach these people MPLAB + FEZConfig FW update/loading code is quite a stretch.

It’s only tedious if I have to do it lol. Also much cheaper for the company if I am not wasting my time on it.

@Gus_Issa Can G30 FW handle solder reflow? I find it hard to believe all of the FW is flashed after soldering on all the SoM’s and development boards for GHI chips.

My supervisor is not happy about all these G30’s coming with outdated FW that has to be updated before loading any code. How do we obtain G30’s that are up to date? We DEFINITELY do not want to update hundreds of G30 FW…should come up to date. We are ordering from Mouser currently…

It would be one thing if the G30s always had the firmware preloaded.

It is really too much to ask for a tech on a line to confirm the current state of the device and then follow certain routines given the current state. They are great people but sometimes I wonder what they are muttering about me and my design in their mother-tongue

Anytime someone from my company makes it out to the fab house we generally spend a lot of our time programming chips using Fez Config. Or sometimes we route the shipment to our office first. Honestly it’s just so boring… haha. Plus the extra leg of the trip costs a pretty penny.

Please do tell us about your solution once your line is running smoothly.

I would assume, that if you are buying commercial quantities, and want the devices delivered in a certain state, then contacting GHI directly might be helpful.

The firmware can be there during reflow.

By the way, you can special order the chips with firmware already loaded. Or even better, hire us to do all the manufacturing and testing, and you will never need to worry about this in the future.

How do I order chips with the FW pre loaded? Please elaborate as I will place an order ASAP…don’t tell me it costs extra to purchase up to date chips…

Manufacturing and testing is done. If I hired you then I wouldn’t have a job

He meant fabrication and post fab testing @hwalker_MIWV, not design and development.

Anything custom costs extra, even pizza

Please discuss your needs with our sales directly.

You do the manufacturing?!! You guys open production line? Good to know.

Some is done in house, some is done with a local company. I test my boards myself and my supervisor tests his. Already got a quote for pre programmed G30’s from sales, passed it on to my supervisor. Good price this time. Previous quotes from GHI steer me away from even inquiring about manufacturing costs.