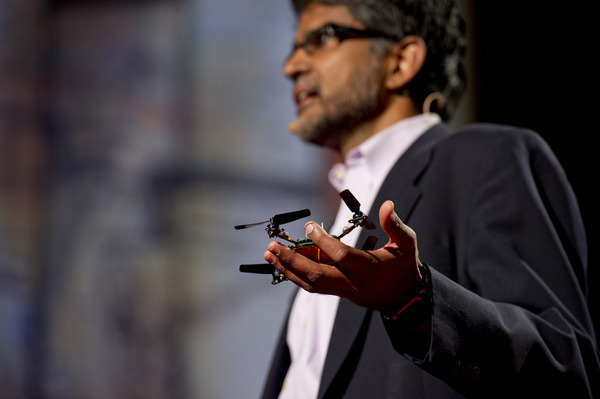 These robots can swarm, make maps, and get young people excited about science.

Long Beach, California—Vijay Kumar’s videos have already been a hit on YouTube, as people have been fascinated to watch swarms of robotic quadrotors perform various feats, like flying through narrow windows and coasting across a room in formation. But Kumar still had a few tricks up his sleeve when he took the stage at TED, and he seized the opportunity to show some serious ways in which aerial robots will change our world.

Some could say that aerial robots are already making a huge impact, primarily in military applications where (very) remote humans often pilot drones in hostile territories.

Kumar, however, envisions aerial robots that can fly themselves and carry out their tasks, on their own, or with minimal human input beyond initial design and programming. His drones offload even more of the job of stabilizing their flight to computers that aren’t even on-board the copter (a weight and complexity advantage). Once airborne, the entire flight is computer-controlled.[/quote]

That last part was interesting.

I’m wondering how they are able to do, what I guess is a PID, remotely?

FYI - if you have an Android phone, check out the new “official” TED Talks app that should show up in the market some time this afternoon. Compliments of my company